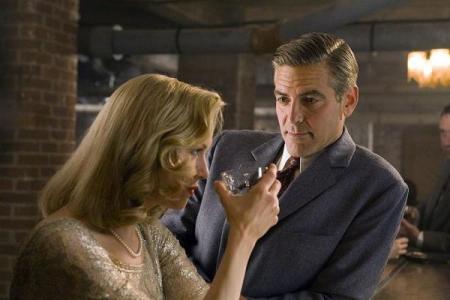 Review:
George Clooney directs himself , Renee Zellweger and John Krasinski in Leatherheads, a period piece about the early days of professional football, and when I say football, I don’t mean real football (the kind played with one’s feet), I mean American football. It’s worth admitting at this point that I do not like American football, and pretty much never have, and I like football movies even less. You know the ones: where the noble, underdog, poor hick kids are inspired by their insane coach to make something of themselves by submitting to his will.

Don’t get me wrong, I realize that most sports movies essentially follow that model, and the ones that don’t are not necessarily better for it. So, I was not very optimistic about this film. That’s why it was a pleasant surprise to find that it rises above its conventional plot with some witty dialogue, particularly the exchanges between Clooney’s over the hill quarterback and Zellweger’s ambitious big city reporter. With its small-market setting and sort-of-love-triangle, Leatherheads could be fairly compared to Bull Durham, another smart romantic comedy that happened to be set in the world of sports.

Clooney weaves the humour around a central theme of how the proto-NFL adopted a higher standard of play in order to increase cash flow, necessitating stricter rules and the creation of a Commissioner’s office. As the film progresses, this theme unfortunately takes over, resulting in the double scriptwriting sin of a courtroom scene and a “big game” scene in the last act. What was an agreeable old-fashioned comedy loses its momentum entirely.

On the bright side, this is a football film that has the courage to come out and say what no other will: that the modern game is boring and overly defensive, largely nullifying the technical skill or natural ability of the new breed of star players. Of course, the film also portrays the sport’s Commissioner as fair-minded and wise, so it is obviously trading in some kind of fantasy.

All in all, Clooney does a very respectable job here with the material, creating an old-fashioned onscreen chemistry between himself and his leading lady that the Coen brothers failed to do in Intolerable Cruelty. There are a number of charming nonverbal moments too, like the inevitable fistfight between Clooney and Krasinski, and the cameo appearance of film composer Randy Newman as a speakeasy piano player. This kind of retro filmmaking exercise is risky, and for the most part, Clooney pulls it off.

Crowd reaction at the end of the movie: none
Credit cookie: none
For further consideration: is there a Writer’s Guild rule that if a film is set in the 1920s, female characters must sound like Dorothy Parker?
Opening next week: 88 Minutes, The Forbidden Kingdom, Pathology, Forgetting Sarah Marshall, Where in the World is Osama Bin Laden?
Please God, anything but: Pathology

www.potzrebie.com
View all posts by Scott M →
This entry was posted in Movies. Bookmark the permalink.